Watching the sun come up as cattle graze Flint Hills under blue skies with family on horseback creates spiritual reality.

“Regardless of anyone’s beliefs there’s nothing so close to the heart as that intimate feeling with Mother Nature,” Jerry Hedrick said.

“I’ve been involved with many facets of Western life, but working with family on horseback is the ultimate,” Hedrick affirmed.

From the rodeo entertainment Hedrick family at Nickerson, the cowboy became successful in corporate business.

“Through it all, I still wanted to have a Flint Hills ranch,” Hedrick said. “My wife Bev is a Chase County native growing up on the Walker Ranch near Cedar Point. Fortunately upon retirement we now have our own ranch.

“It has been a dream come true for me,” he added.

Maintaining homes in a Kansas City suburb and near Strong City, the couple rotates living in both communities.

The Chase County home has been developed to include horse facilities while Saddle & Sirloin Club offers urban horse care. “Karlie Gibb looks after the Strong City place when we’re away,” Hedrick noted.

From youthful days working rodeos, Hedrick continued as a clown into adulthood before becoming demanded as a rodeo announcer.

“I was really following my namesake, dad Jerry, both as a clown and announcer,” Hedrick admitted. “Dad liked the entertainment side of Western life. But I took more after my grandpa’s love for training performance horses and working with cattle.”

A custom grazer, Hedrick manages summer cattle on his personal land and pastures subleased from other owners. “We’ve looked after the Langenegger Brothers pastures for more than 30 years,” he noted.

In the catch pen, cattle that have been intensive grazed short season on native pastures are sorted by Bud Higgs, Frank Higgs, Jerry Hedrick and Rob Rothhaas to be loaded on trucks headed to feedlots. (Doug Busby photo)

“This summer 16 of us worked together two days on horseback rounding up steers for shipping to feedlots,” he said. Included were Hedrick, his wife Bev, their daughter Ginger, husband Rob Rothhaas, and children Chase, 15, and Lauren, 13.

“Our grandchildren are the fifth generation having an interest in Flint Hills ranching,” Hedrick pointed out.

Additional “family” helping with roundups was Frank Higgs and his son Bud plus Makenzie and Troy, Bud’s children. “We’ve worked with the Higgs family for many years and ride several Quarter Horses of their breeding program,” Hedrick noted.

Lawrence Osgood and his sons Paul and Garrett were there with the Krueger brothers Bo and Colton, and Kip Strate. “Paul Osgood lives in Spur, Texas, but came back home for two weeks to help ranchers,” Hedrick said.

“We’re really a close knit ‘family’ who all enjoy working together horseback in the beautiful Flint Hills,” he added. “Bev’s homemade hot rolls after the cattle are loaded sure helps make everyone eager to get the job done.”

Management of the Flint Hills is important to Hedrick. “It is much different than years ago when cattle were on pastures full season until October,” he said. “Cattle size determines stocking rates for intensive grazing, but we generally turn out twice as many cattle for half a season.

“Grass has higher protein in the early months for the least expensive cattle gains. They’ll put on 2-3/4 to three pounds a day,” Hedrick explained. “The native pastures have time to recover in late summer for the coming year.”

During practice sessions, Hedrick prefers roping live cattle, however sometimes has mechanical assistance. “I am generally a header, but I can rope either end,” he said. “I have a ‘Smarty Steer’ mechanical device for practice at Saddle & Sirloin.”

Tension is on when Hedrick comes out of the heading box. “I don’t intend to ever miss,” he insisted. “It’s always important to catch for a heeler, but more so for young cowboys learning to rope and train horses.

“I want to help in every way I can,” Hedrick said. “That’s been my family’s Western way of life assisting others which seems different than in other parts of society.”

Whatever age, it’s always important to be among the winners. “Just 80,” Hedrick won a “pretty good check” out of 200 teams at a recent roping in Oregon, Missouri.

“I’ve seen and done a lot with cowboys, rodeo and horse people during my life. Nothing compares to working with family horseback in the Flint Hills,” Jerry Hedrick declared. 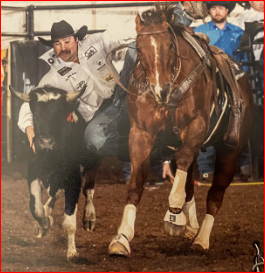 By Frank J. Buchman    2020-10-26
Tanner Brunner of Ramona shows the championship steer wrestling form making him sixth in the world regular season standings.  “It was a good year yet a different year for sure.” &... 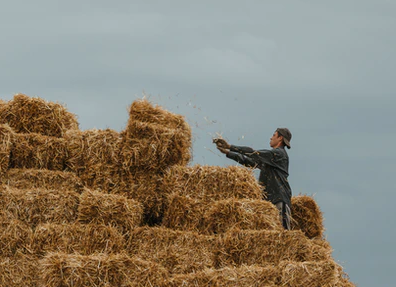 By Katharine MacCornack    2020-10-22
I had never really given much thought to the guys who deliver hay as I mostly deal with their boss, the farmer. It’s up to him or her to hire and supervise his/her staff. One day, when my young ...
Newsletter
Follow us on
Share
Search 30,000 ads on the U.S leading equestrian site
on horseclicks:
home | contact us | terms and conditions | testimonials | about us | sitemap | help | privacy policy | Scams | mobile site
Disclaimer HorseClicks is not responsible for any errors or incorrect information posted by its members and does not represent or share opinions of its members. Accessing this website signifies your agreement to be bound by the Terms of Service.©2020 Horseclicks.com - all rights reserved - a member of the Friday-Ad network  |  dev (((:))) Memória Visual