Steve and Myra George of Salina see many benefits of young people working with livestock. They give their daughter and grandchildren that opportunity especially with horses and horseshows.  At the home barn Saturday afternoon were Myra, Jocelynn, Christian, Steve, Jeannie, Brysie and JJ.   Allie and Kyler didn’t make it that time. Horses joining in for the camera were Brandy, Tuff and Autumn.

Five horses in a four horse slant trailer pulls in first as passengers heads pop up from travel morning naps.

Right behind is a front-seat, back-seat filled sport utility vehicle, maybe a half dozen more gazing though the windows.

All pile out, nine plus five equines making a total number of 14 and the horse show action begins.

Well now, that’s when everybody can come. Sometimes there’s just a handful of riders plus mounts.

“So many kids don’t get to experience agriculture life. They spend so much time on computers, tech stuff, and miss out on benefits of dealing with livestock.”

Steve George of Salina is heartfelt in that philosophy.

They’re making sure family and often other young people in the community get those opportunities common during their youthfulness.

“I have such fond memories of growing up on a farm working with livestock.  I want to help others have those pleasures and learn along the way,” George said.

“Fortunately that has become possible with our daughters and grandkids,” he added.

Yes, George is driving the trailer rig and Myra has the other carload.

Rattling their names with notable affection, George clarified, “Our daughter Casey Long is obviously a busy mom too.”

It’s not an all horse story, but likely inappropriate not to recognize the equine partners here also. Well, there’s nine altogether on the four acre farm headquarters a mile west of town.

Just seven are on the present horseshow roster: Andy, Autumn, Bonnie, Brandy, Cowboy, Rey and Tuff. Back home are: Buddy and Sadie.

“We can only haul so many; so everybody usually has to share horses some,” admitted George, who also competes.

“I keep busy helping get the horses ready while Myra makes sure the kids are prepared as possible. She is in charge of logistics.

“That’s pre-entries; adding and dropping classes, correct rider clothing, helping kids learn patterns; most importantly having the right numbers on. Organizing the chaos; Myra is a great organizer,” George grinned. “God laughs with us every day.”

It all began with 4-H club work, George verified. “The kids got started with bucket calves, even though we always had horses.

“Then there was sort of a fluke deal when a friend wanted to give us three horses,” George continued. “We ended up taking them and that really was life changing as all of us got into horses,”

Of course, they participate in 4-H shows along with the Blackjack Saddle Club and occasionally the Eastern Kansas Horseman’s Association.

“I grew up near Uniontown in Bourbon County and did mostly the racing events,” George said. “Then I got started in more of the horsemanship type competitions which helps make better riders I think.

“We now mostly just compete in the pleasure and rail classes but there are occasional exceptions,” he added.

Results announcements verify when the George family’s Sundowner trailer pulls into an arena parking area, competition beware. It takes a good size satchel for the collection of awards those riders accumulate.

Best example was when they brought in 12 state fair qualifications from the district 4-H show. Then their stow was further enhanced with a handful of rosettes at that recent prestigious and certainly tough Hutchinson show.

Still the home farmstead is a “small zoo,” according to George.

“In addition to the horses, there were nine beef steers and nine pigs before the Saline County Fair,” George said. “That included projects of another girl in our 4-H club.”

Semblance of a horseshow, Steve and Myra George had an even busier weeklong fair keeping kids and projects organized.

“It helped get them ready to go back to school at Bennington. They all attend school there which we like with more rural type kids and smaller class sizes,” George said.

Involved in 4-H club work growing up, George attended Fort Scott Junior College before graduating from Kansas State University. “I showed livestock and was always involved in judging,” he said. “So I was on the livestock judging team at both colleges and graduated in agriculture education.”

After a student teaching bout, George returned to K-State for graduate courses in economics. “I started with the Production Credit Association at Salina in 1984,” he remembered. “Then in ’97 I went to the Bank of Tescott where I still work here in Salina and also at Tescott.”

Moving to their Saline County acreage in 1995, the original home with detached garage has much expanded livestock facilities today.

Gypsy was 34-years-old when she passed away a couple of years ago. “Autumn is 32-year-old and still going strong. She loves to be in horseshows, and the kids all love to ride her,” George said. “They’ve all ridden Autumn at some point and she’ll often be in several classes with different riders.”

Most “famous” horse has to be Jeannie’s white and brown polka dot POA (Pony of the Americas) gelding called Tuff.

“He’s 17-years-old and can do it all very well. Tuff’s truly one of a kind, but only Jeannie rides him,” George said. “Oh, I got to ride Tuff a couple of times.”

Jeannie will sometimes let her nieces and nephews show Tuff in showmanship as well.

Occasionally new additions come to the horse lineup as family projects so all have a mount when need arises.

While Grandpa-Dad and the seven younger generation “all ride a lot” Grandma-Mom Myra “takes care of everybody.”

Steve George appreciates: “That’s a fulltime job for Myra helping make sure we’re all where we’re supposed to be.”

No slowdown in sight. “We’ve been blessed to spend so much time with our daughters and grandchildren,” George said. “We’ll continue going as long as we can. Hopefully we can help our great grandchildren and other young people with horses along the way.” 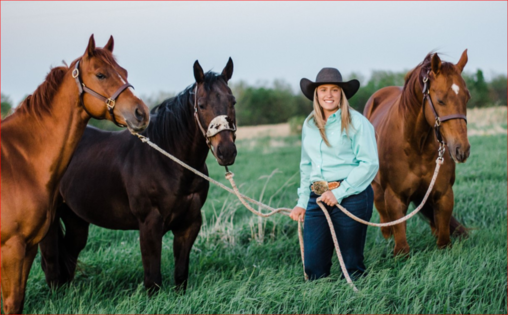 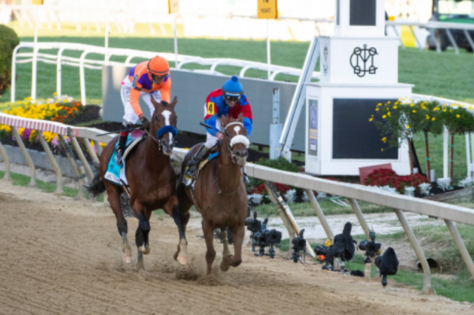 By Frank J. Buchman    2020-10-15
At the Pro Rodeo Tour Finale last month, Jesse Pope was champion in bareback bronc riding with 90 points.  Making the buzzer is the first requirement of becoming a champion rodeo rough stock ...
Newsletter
Follow us on
Share
Search 30,000 ads on the U.S leading equestrian site
on horseclicks:
home | contact us | terms and conditions | testimonials | about us | sitemap | help | privacy policy | Scams | mobile site
Disclaimer HorseClicks is not responsible for any errors or incorrect information posted by its members and does not represent or share opinions of its members. Accessing this website signifies your agreement to be bound by the Terms of Service.©2020 Horseclicks.com - all rights reserved - a member of the Friday-Ad network  |  dev (((:))) Memória Visual