Kansas cowboys are as taken back by the coronavirus as the rest of the world.

Yet Tanner Brunner, professional steer wrestler from Ramona in Marion County, is back on the trail tougher than ever.

Qualifying for the National Finals Rodeo finishing 15th in the world for two years, Brunner’s determined to make it three-in-a-row.

“I want to get back to Las Vegas for the run at that big money,” said Brunner, 27. “It’s a big stage, and you learn something every time you are there. I just hope to use everything I’ve learned when I go back.”

According to the Wrangler Rodeo Network, this Professional Rodeo Cowboys Association (PRCA) season has been “bizarre.” With rodeos virtually stopping in mid-March due to the pandemic, professional rodeos restarted full-fledged the third week of May.

Despite stop and start of the season, Brunner worked up to tenth in world standings with $26,235 on June 29.

His strong move was enhanced by splitting wins at the Woodward, Oklahoma, and Coleman, Texas, rodeos, both ending June 13.

Brunner had a 3.8-second run in Woodward and earned $3,266 by tying with Trell Etbauer.

The Kansas cowboy stopped the clock in 3.7-seconds at Coleman collecting $1,925 after splitting the victory with Gabe Soileau.

“It was a good feeling to do that well,” Brunner said. “It was good to kick things off and get things rolling again. I wish I could go to rodeos every day when I’m on a roll like that.

“I had good steers at both rodeos and tried to do my job to make good runs,” he added.

Brunner rode Miss Kitty, 13, at the rodeos, with Cole Edge, riding Slick, serving as hazer for both runs.

“I just tried to help out wherever I was needed,” the 6-foot-2, 230-pound Brunner said. “I practiced a little bit, took some time off and let my horses take some time off. When things looked like they were going to get started, I began practicing and getting my horses in shape.

“I enjoyed my time at home for sure, but I was ready to go to some rodeos,” Brunner admitted.

His calendar was filled competing in rodeos throughout the western half of the country during the Fourth of July run.

By Katharine MacCornack    2020-10-22
I had never really given much thought to the guys who deliver hay as I mostly deal with their boss, the farmer. It’s up to him or her to hire and supervise his/her staff. One day, when my young ... 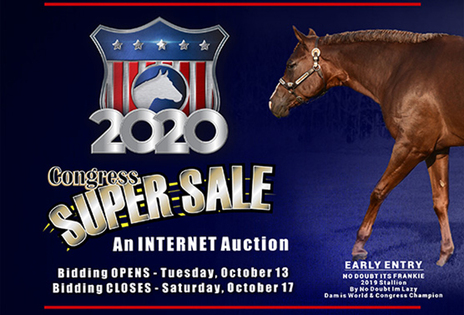 2020-10-21
The Ohio Quarter Horse Association’s Congress Tri-Chairmen and Sale Committee decided to proceed with the 2020 Super Sale in an online platform this past August, after the cancellation of the 20...

By Frank J. Buchman    2020-10-19
Hannah Hughes, Fort Scott cowgirl, credits her horse team of Ziggy, Rocket and Effie for much of her rodeo success. “Nod. Swing. Throw.”   Watch stops, rodeo announcer ex...
Newsletter
Follow us on
Share
Search 30,000 ads on the U.S leading equestrian site
on horseclicks:
home | contact us | terms and conditions | testimonials | about us | sitemap | help | privacy policy | Scams | mobile site
Disclaimer HorseClicks is not responsible for any errors or incorrect information posted by its members and does not represent or share opinions of its members. Accessing this website signifies your agreement to be bound by the Terms of Service.©2020 Horseclicks.com - all rights reserved - a member of the Friday-Ad network  |  dev (((:))) Memória Visual