Never shy with a jive, he forwardly claims to be a “distant cousin of a fellow named Noah who had a big boat.”

Requiring a bit of head scratching, most people can figure out connection to the prominent Biblical figure.

Joe Hedrick may not have quite the diversity of animals that were on Noah’s Ark, but quite close.

“I’ve always enjoyed working with animals ever since I was a kid,” Hedrick admitted. “It was natural that once I got a llama other exotic animals became my life’s venture.”

Naming all of the species that the Nickerson entrepreneur owns requires an animal dictionary.

“I don’t know the number of animals here, close to a thousand sometimes. It varies with babies arriving all the time,” Hedrick acknowledged.

“I grew up working with my family at rodeos throughout the Midwest,” Hedrick recalled. “My dad Jerry started out competing in rodeos, then became a clown, and finally announcer with contract entertainment.”

Living in a travel trailer, the Hedrick rodeo family performed in a different town every weekend.

“My older brother Jerry Jr. and I became clowns following in Dad’s boot steps,” Hedrick said. “We did trick roping and with our sisters presented a variety of trained animal acts.

“I had a guanaco, a cousin to the llama, that was the first animal I trained personally,” Hedrick recalled.

Always an attraction for rodeo spectators was when the Hedrick family came honking in the Bucking Model T Ford.

“Dad enjoyed developing that act which included Mom and all of the family,” Hedrick smiled. Their original Hedrick Bucking Ford remains a prized family possession.

Continuing to clown, Hedrick attended Fort Hays State College on a rodeo scholarship riding rough stock. There he met and married his wife Sondra (Hutchins), a barrel racer, to carry on the rodeo family tradition.

“I taught high school industrial arts for a time, clowned some and did contract acts,” Hedrick said.

“I bought, sold and traded exotics with zoos, owners and breeders all over the country,” he said.

Displaying his animals for grand opening of Harry Herbel’s Surplus City at Herington was the start of Hedrick’s Petting Zoo.

“We’ve had four petting zoos on the road going all over the United States through a booking agent,” he said.

Pony rides have always been popular but now Hedrick’s camel rides attract as much interest.

Rides on camels are often more popular than pony rides when Joe Hedrick offers them at fairs and other community get-togethers.

Soon, Hedrick began raising his own exotic animals. “We started out with two zebras, and now about 50, two camels and now 70. A couple kangaroos, now I don’t know how many,” he tallied.

“It became complex scheduling tours so we renovated a farm building into a bed and breakfast,” Hedrick said. “Visitors can look out their windows and see all of the animals.”

Pig races were first observed at a convention Hedrick attended. “The crowd just went wild and I knew we should do that,” he said. “Our racing pigs have been popular throughout the country, even on red carpets of swanky hotels.”

Ostrich, camel and zebra races with Hedrick’s animals thrill nationwide community gatherings. “I’ve been contacted about doing a reality show featuring animal races which I think will develop,” he noted.

Animals are provided for many nativity scenes each Christmas season. “We also work animal acts with the Rockettes in New York City during the holidays,” Hedrick added.

Annually contracting six dozen engagements, the coronavirus has impacted this year some.

Added to diversity, Hedrick is a professional auctioneer and a farmer with several thousand acres.

“We have a stock cow herd, about 200 head, and background the calves to sell as yearlings,” he said.

Dedicated workers help get everything done. “We’ve had more than 40 employees sometimes, but about half that now. I truly appreciate their hard work,” Hedrick emphasized.

“This is a family business,” Hedrick insisted. “My wife handles the bookwork and has her helping hand in everything. Sondra is especially good birthing animals.”

Their son Aryn was a champion bull rider and works all aspects of the operations, dedicated to cattle. Daughter Hallie lives with her family at Lawrence, but has an important part in native home operations through modern technology.

“Our five grandchildren are also involved. Some of them might even end up in rodeo and show business,” Hedrick said.

“Only 76,” Hedrick has no slowdown in sight. “I have a lot more entertainment ideas up my sleeve. It’s been a great life. I was born a showman and always will be,” Joe Hedrick declared. 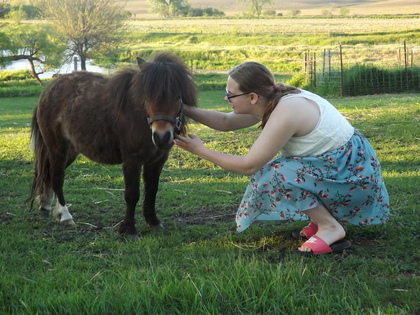 2020-09-29
We had horses since we were married. Went riding and showed our Appaloosas and then miniature horses. After about 14 years of marriage we adopted a little boy, began the process of adoption ... 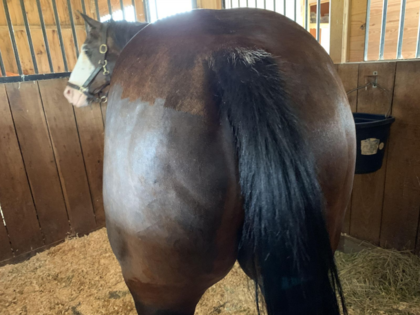 By Katharine MacCornack    2020-09-29
One morning before sunrise when nocturnal darkness had just begun to dissipate the skies, barely enough for the eye to see slightly, but not well, I went out to bring the horses in from night turnout.... 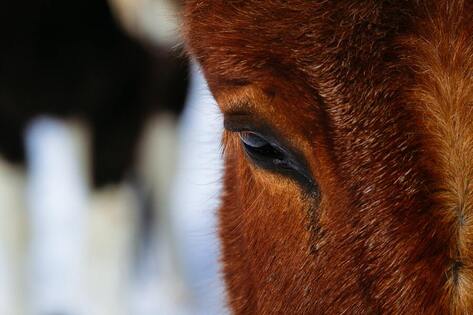 A Meeting Of Souls

2020-09-28
I’ve always loved spring with the awakening of sleeping trees and plants and the flowers they bring.  But mostly the flowers!! And with the arrival of spring comes Mother’s Day. ...
Newsletter
Follow us on
Share
Search 30,000 ads on the U.S leading equestrian site
on horseclicks:
home | contact us | terms and conditions | testimonials | about us | sitemap | help | privacy policy | Scams | mobile site
Disclaimer HorseClicks is not responsible for any errors or incorrect information posted by its members and does not represent or share opinions of its members. Accessing this website signifies your agreement to be bound by the Terms of Service.©2020 Horseclicks.com - all rights reserved - a member of the Friday-Ad network  |  dev (((:))) Memória Visual