Horse trainer Scott Daily, Arkansas City,  moves a six-year-old bay gelding both directions in his first ride during a horsemanship presentation at the Topeka Farm Show.

“It is possible to teach an independent middle aged horse of leisure a new life for a useful profession.”

That was proven in the first of a handful of horsemanship presentations by Scott Daily at the Topeka Farm Show.

Some young horses that have never been handled or hardly seen anybody respond with flight and fright. “They are afraid of anybody and everything and try to get away,” according to Daily, horse trainer from Arkansas City.

However this training project in front of bleacher filled spectators was quite different. “He’s a six-year-old gelding with some ground work,” Daily explained.

That was accurate, but a visit with owner Steve Nelson of Allen revealed more background.

“We raised this bay colt, but really never did much except feed him,” Nelson said. “We had him castrated, haltered and lead him a few times last fall. The rest of the time he’s just been a pet eating and doing what he wanted.”

Horses with such an easy life can require unique techniques different than with a wilder colt, Daily explained.

“A horse that’s used to people all of the time will seek the attention they’ve been accustomed to,” Daily said. “Instead of moving away from a person, the horse can be resistant, push back and even rub against the handler.”

Maneuvering the untrained gelding in a small pen, Daily slowly placed a rope halter with a 20-foot shank on him. The horse was moved into a makeshift round pen designed with 11 ten-foot portable panels surrounded by the bleachers.

“He’s cautious of the bright lights and people, but not bad for his first trip to town,” Daily evaluated. “I plan to put his first ride on him.”

The horse was prodded around the pen first with the lounge line and verbal smooching from the trainer. “He needs to learn forward motion stretch his legs out and relax,” Daily encouraged.

A lightweight buggy-type whip with a flag attached was used to persuade horse movement. “Smooch, smooch, smooch,” Dailey mouthed to his trainee. “Very good, but now he has to go the other direction. Everything must be done from both sides.”

The colt was brought in beside the trainer who put the long rope over his hips and tightened the rope. “He must be handled all over to better understand and not be scared,” Daily insisted. “This is a nice friendly colt, yet he wants to wallow on me. He’ll find out that’s more work than fun.”

With the rope over his back, legs and then tightened around his heart girth, the horse showed no agitation. “This will get him used to the pressure when I put the saddle cinch on him,” Daily said. “He’s doing very well; nice job.”

Pulling the horse, his head was guided around to the left and back around to the right. “He has to learn to turn both directions,” Daily said.

“He must be used to weight on his back and fortunately doesn’t seem to mind it. I think it’s time to saddle him.” Daily critiqued his student

A pad on the fence was brought down placed on the horse’s back and rubbed around without offending the horse.

With the pad in position, the saddle was placed gently on the horse’s back and moved around slowly. “This is a nice horse. He understands we’re not trying to hurt him,” Daily complimented.

Bringing the girth slowly up under the horse’s heart, it was snugged slightly and then loosed. “I have to get it tight enough so the saddle doesn’t turn,” Daily said as he continued tightening.

First moved in a tight circle around the handler in both directions, the trainee showed little alarm to the saddle.

Then asked to walk in a larger circle then trot and canter Daily exaggerated persuasion as the horse increased speed. The horse never attempted to buck and hardly flinched.

“Good job,” the trainer appreciated. “Now he has to go both directions like always. This horse is about ready for his first ride.”

Collecting the horse back beside him, Daily stepped up into the left stirrup and then back down. Then the trainer mounted completely into the saddle and stepped back off again. The action was repeated on the horse’s right side.

Tying the lounge rope to the halter forming a rein, Daily snugged the rest of the rope in his belt.

Stepping up into the saddle, the trainer seated himself into position without the horse moving. “Good job,” Daily appreciated.

The horse was then asked to move around to the left and then around to the right. “He’s tight, doesn’t understand what I’m expecting, but doing fine,” Daily said.

Before long the rider had the horse moving in small circles both directions with little resistance.

As the horse was moved to the round pen side, he was encouraged to walk faster and trot both directions. “This is a nice horse really trying to cooperate,” Daily said.

With never any attempt to buck, the horse was still sluggish in movement. Daily loosened his lariat from the saddle and prodded the horse into a canter and gallop both ways.

“He’s sure taking to everything we’ve asked,” Daily said as he uncoiled his lariat and swung it over the horse.

“Good job,” the trainer acknowledged taking a bullwhip from the railing and swinging it slowly.

The whip was snapped softly from both sides with only a flinch of the horse’s ear. There was no further alarm when the whip was popped loudly from the left and right.

“A good horse,” Daily credited as he stood up in the saddle removing his hat acknowledging the applauding spectators.

“This was a great first ride for a horse who wasn’t doing anything but sure has lots of potential. However, it’ll still take a lot more work and training for him to be a well broke horse,” Daily clarified. 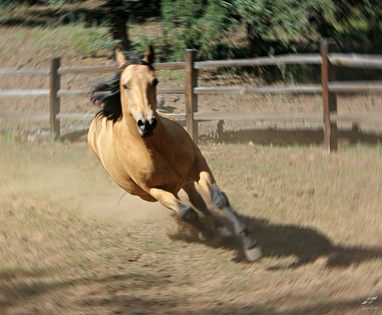 Keeping Your Horse in Balance

By Tanya Buck    2020-02-26
No matter the discipline, we all want a balanced horse to ride. One that feels steady and is easy to sit at any gait, and one who can easily maneuver around a curve, over an obstacle and down the path... 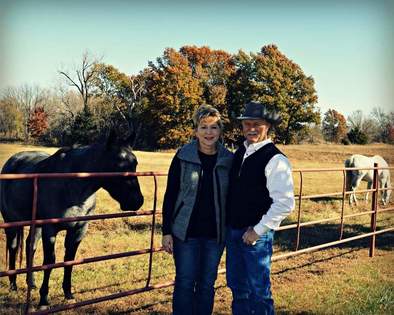 2020-02-25
While Shevawn Shields sometimes gets to go to cowboy music and poetry shows presented by Del Shields, their home is the ranch near Humboldt. This singing cowboy is the real thing truly living the ... 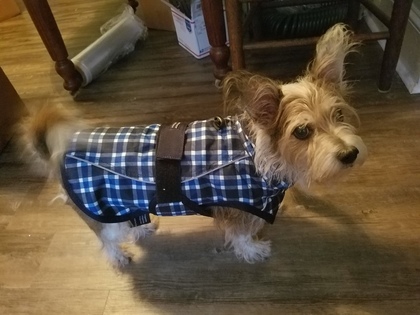 By Cher Griffin    2020-02-19
It seems funny to be writing about dog coats for a horse publication. We all know dogs are part of just about every horse farm on the planet. Some are workers, protecting the farm and livestock but mo...
Newsletter
Follow us on
Share
Search 30,000 ads on the U.S leading equestrian site
on horseclicks:
home | contact us | terms and conditions | testimonials | about us | sitemap | help | privacy policy | Scams | mobile site
Disclaimer HorseClicks is not responsible for any errors or incorrect information posted by its members and does not represent or share opinions of its members. Accessing this website signifies your agreement to be bound by the Terms of Service.©2020 Horseclicks.com - all rights reserved - a member of the Friday-Ad network  |  dev (((:))) Memória Visual