While a relatively new breed, the Rocky Mountain Horse is gaining popularity throughout many parts of the world as a comfortable and smooth trail horse. Beyond its unique coat pattern, its special gait has interested many first time buyers in this “rare” breed. Registered Rocky Mountain horses only reach about 20,000 in total over 11 countries but as more people retire, the demand for smooth, gaited horses that are dependable on rough terrain is only on the up.

Rocky Mountain horses most likely, but unofficially, trace their ancestry back to European gaited horses such as the Spanish Jennet (originally from Libya), the Irish Hobby and the Scottish Galloway. In colonial times the Narragansett Pacer (which we can call instead the “Rhode Island Horse” to not remained befuddled on the name and focus instead on the bigger picture) was all the rave for its ability to trot for miles without fatigue and with a smooth, comfortable gait. Mainly a mixture of Spanish Jennet and imported English horses is most likely resulted in the Rhode Island Horse as Christopher Columbus and company had been bringing Jennets over to the Americas since 1493. By the early 1600s, English merchants were importing their own horses and a cross between English horses, Hobbies, Galloways and the hardy little Spanish horses quickly began. The Rhode Island horse was widely well known in Colonial times but quickly was erased from public record by the early 1800s due to over cross-breeding and the simple fact that no formal registry maintaining the breed had ever been created. Galloway ponies from Scotland, although now extinct, were reported having sometimes an unusual chocolaty brown colored coat that is seen and preserved in the Rocky Mountain horse.

The official, recordable beginning of the Rocky Mountain horse began in the early 1900s when Sam Tuttle, a gaited horse breeder from the foothills of Kentucky had a stallion named Old Tobe, chocolate in color with a flaxen (golden) mane and tail and docile in nature that produced offspring alike. He passed down special, specific genetics that produce the deep dappled chocolate coat with silver tones throughout the body, mane and tail that so famously differentiate the Rocky Mountain horse from its gaited horse relatives. 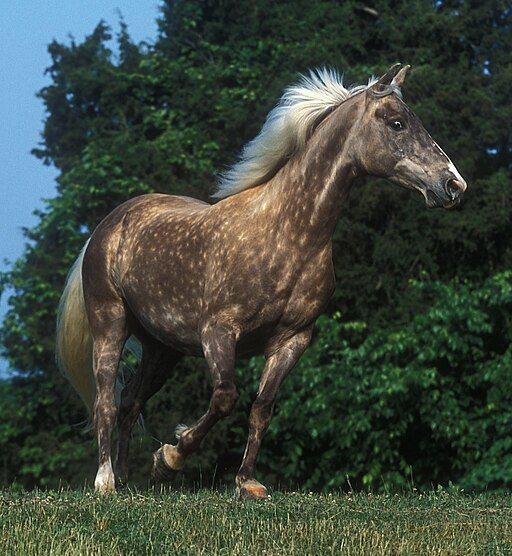 Rocky Mountain horses generally have a slightly dished facial profile, little to no facial markings (bald faces are not allowed in the registry) and should be overall solid in color. The most common colors are chocolate, black, chestnut, red chocolate, bay and palomino. White leg markings may not cross over the knees or hocks and they must stand between 14.2 hands and 16.0 hands tall to be able to be registered by the Rocky Mountain Horse Association.

All Rocky Mountain horses should have at least one “special” gait, either able to single foot/rack or amble- basically a clear, four beat gait that is smoother than a trot (and much easier to sit!). Unlike their relative the Saddlebred, for example, which picks up its knees and hocks with great action, Rocky Mountain horses have barely any “action” and do not take their feet high off the ground when at a walk, trot or when gaiting. This is to prevent fatigue while traveling long distances on difficult terrain. Like other gaited breeds, the slope of their shoulder is at around 45 degrees and their neckset is arched, allowing a naturally upright, higher headset which allows an open chest which furthermore allows the horse to step underneath himself to produce its special gait(s).

Old Tobe lived a healthy life well into his late 30s and most Rocky Mountain horses carry on his long lifespan and easy going/easy keeper characteristics. Rocky Mountain horses are most commonly found out on the trail, in endurance riding competitions, for recreational riding, therapeutic riding programs and with hunters on horseback. Ideally, the Rocky Mountain a horse for beginners, riders with pain or physical limitation, or for anyone looking for an attractive and smooth trail companion.