An attraction to golden horses can be traced back almost to the time when horses and human first exchanged their mutual respect for one another. Some Greek mythology experts suggest that Pegasus was not white but had a creamy, golden coat instead. Ancient artists adored the golden horse though oil paintings and in recent times, the unabashed interest in the golden coat color is still holding strong.

Roy Rodgers, the “King of Cowboys” and his palomino brought the palomino into motion picture where they won the hearts of many viewers followed by Mister Ed, another palomino TV star. Both Trigger and Mr. Ed were trained in over 100 cues! Trigger was the perfect example of a man's best friend, helping cowboys in the wild west and even was companion to Maid Marian in the 1938 movie, The Adventures of Robin Hood while Mister Ed was a talking horse and a weeknight star on a CBS sitcom. Trigger would later go on to be the star of his own comic books called, Trigger. J.K. Rowlings, the author of the Harry Potter series may have also shown her affection to the color breed when she created “Abraxans,” a palomino colored mythical horse-creature, so strong and big that a team could pull house-size carriages.

Palomino's are not defined as a specific breed but rather as a color type. While some breeds have far higher chances of producing a palomino coat color than others, the weight and height of palominos greatly varies. What they all have in common is in their genetics, meaning, they all carry the cream dilution gene. A Haflinger or a Belgian horse may look like a “California blonde” but may not possess the genetics for a palomino coat color and are a result of other genetics. 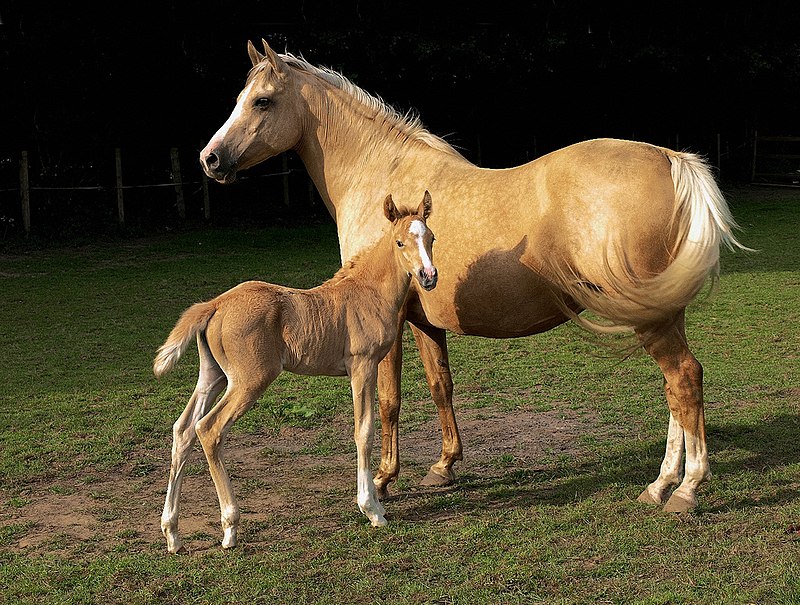 The palomino color was adored by Queen Isabella of Spain. She reigned in the 15th century and was responsible for funding Christopher Columbus's adventures that found him and his crew in the heart of the Americas. So beloved was the palomino to her, she had a large stable devoted to the color and exported one stallion and five mares into the new world, the New Spain (Mexico/ Latin America). From there the impressive beauty of the palomino began marking its fame in the stock of horses that would develop the Mustang, Quarter Horse and other breeds. Sometimes, usually in Spanish speaking countries, the term Isabellas refers to palomino's and other golden-colored animals in reference to Queen Isabella.

Today, more than 300 years since the palomino caught the interest of the Queen of Spain, the palomino is a color preserved and developed by many breeders and recorded in two different color registries. The Palomino Horse Association (PHA) and the Palomino Horse Breeders of America are two associations that accept palomino types into their registry. While no set of common characteristics are defined by the color “breed,” the temperament and the use of palominos widely varies. Palominos are often seen in performances and reenactments, parades and in the show ring. It is possible but extremely rare to see a palomino Thoroughbred on the racetrack as well.

The PHA is a general association with less defined regulations, allowing drafts, ponies and cremello palominos (light cream colored horses with blue eyes- very stunning!) to be registered. It is a smaller association compared to the Palomino Horse Breeders of America, an organization interested in registering light, riding-type palomino's.

The PHBA is very active in creating US-wide PHBA recognized shows and clubs for registered members while promoting high standards in palomino breeding. It has registered over 800,000 palomino Quarter Horses, Arabians, Thoroughbreds, Saddlebreds, Tennessee Walkers, Missouri Fox Trotters, other breeds and half breeds that meet some basic requirements. The horse must be between 14 and 17 hands (with some exceptions), not hold characteristics of either a pony or a draft horse, must not have any primitive markings and their tail can have 15% or less black, chestnut or brown hair mix in the white tail hair. Different rules apply when they are either registered under specific, recognized breed associations, is a stallion, mare, gelding, spayed or grade horse but the general standard is a horse that shines like a golden coin with white manes and tails and is a light saddle type.