The phrase “Omega Fatty Acids” has become somewhat of a buzzword in food culture; though a large number of us are aware that we don’t get enough of these macronutrients in our diets, a lot of us aren’t sure what, exactly, omega fatty acids are or why we’re supposed to consume them. But fatty acids aren’t just essential for human bodies—our equine companions also need them in order to stay healthy.

What are omega fatty acids?

Omega fatty acids are a kind of unsaturated fat (that is, “good” fat) that can be found in certain foods that humans and animals eat. There are actually several different kinds of omega fatty acids, but the two that horse owners should be most concerned about are Omega-3 and Omega-6. These varieties are also known as alpha-linolenic acid (ALA) and linoleic acid (LA), respectively.

Why does my horse need omega fatty acids?

Omega fatty acids are used by your horse’s body for several essential functions. Despite their similar names, Omega-3 and Omega-6 have noticeably different benefits, so it’s important that your horse gets enough of both.

·  3s help build, repair, and maintain cell membranes, as well as promoting healthy brain and reproductive functions. They can keep your horse’s coat healthy, his bones and hooves strong, and his joints pain-free. They also have anti-inflammatory properties, enabling them to “clean up” wounds in the process of healing.

·  6s promote inflammation following muscle injuries. While that may sound like a bad thing, inflammation is actually a natural part of the body’s healing process; it helps to “jump start” the reformation of blood vessels in the affected area. Omega-6s are also heavily involved in immune system responses, which allow your horse to fight off infections and illnesses.

Omega-3s and Omega-6s are essentially two sides of the same coin. In an ideal system, their opposite functions work together in harmony to keep your horse fit and strong.

How can I make sure that my horse is getting enough omega fatty acid?

Good question! One important thing to know about fatty acids is that your horse’s body cannot produce these nutrients organically—they need to come from his diet. If his food doesn’t contain adequate amounts of either Omega-6s or Omega-3s, you may need to add some supplements to his regular meals.

Great sources of Omega-3s include:

Algae meal is a little more obscure than the others on the list, which means that people don’t often think of it when they’re considering making alterations to their horse’s diet. However, it’s definitely gaining in popularity due to its awesome Omega-3 content and gut-health boosting properties. It’s also a high in chlorophyll (for blood health), protein, and vitamins.

Meanwhile, Omega-6s can be found in:

Equine nutritionists are still a bit divided on the ideal ratio of Omega-6 and Omega-3 in a horse’s diet. In humans, the number to strive for is somewhere between “perfectly equal” and five parts Omega-6 to one part Omega-3. These numbers are catching on with horse enthusiasts, as well. Unfortunately, most humans and horses are extremely out of balance when it comes to fatty acids; we eat far too many Omega-6s and not early enough Omega-3s. Omega-6s are not necessarily bad (remember, their inflammatory properties are necessary for the body to heal itself), but consuming too much of them can cause health issues. In horses, a surplus of Omega-6 may have detrimental effects on the brain, joints, and reproductive system.

The next time you’re feeding your horse, take a look at the guaranteed analysis of her regular food. Note the ratio of Omega-6 to Omega-3, and if it’s considerably leaning toward one or the other, it might be wise to make some adjustments. The fix might be as low-key as tossing a few handfuls of stabilized flaxseed into her bucket, or as decisive as switching to a new kind of feed entirely. In either case, please remember to make any and all adjustments to your horse’s diet slowly and gradually, keep an eye out for any negative reactions, and give the new meal plan 30 to 90 days to “kick in” before expecting any positive changes.

Remember: horses don’t always have the best judgement when it comes to eating well, and they’re not known to keep up with the latest research in equine nutrition. For that reason, it’s critical for their human caretakers to stay informed and make good decisions on their behalf! 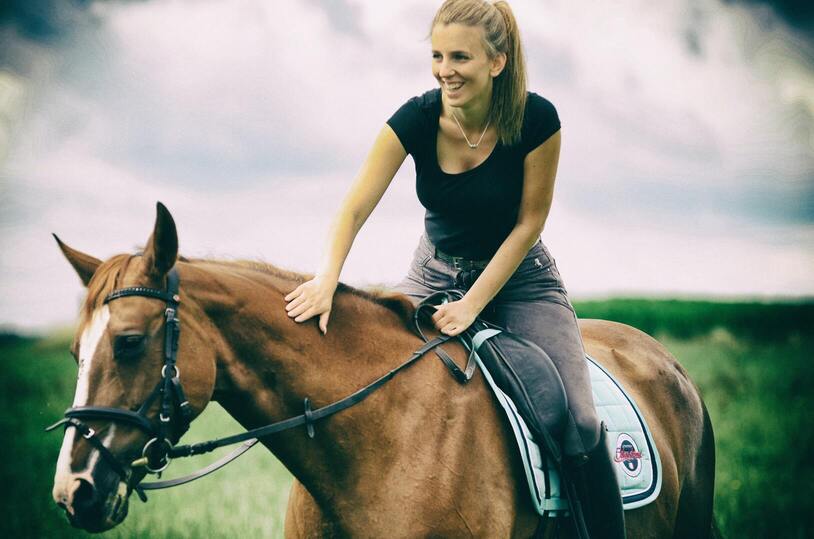