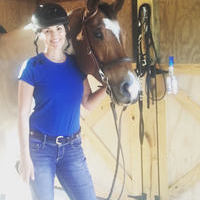 By Jennifer Hazelwood
08-07-2019
Who remembers their first parade? How old were you and did you watch from the street or stands or were you in the parade in some way? Maybe it was a huge parade in a big city or a small quaint parade on an old dirt road. Whichever it was, I’m sure the memory is the same. Were there horses in the parade and if so did you imagine yourself riding one of the horses? Maybe you imagined leading the parade while carrying a flag, or riding in one of the buggies being led by a team of horses.
Although I was born in South America, I basically grew up in Oklahoma. That’s where all my horse craziness started. Like many kids, my mom enrolled both me and my brother in 4-H.  I have so many good memories of my years with the 4-H club. I made so many friends and still keep in touch with a few of them today. One of those memories are the parades we had every year!
My mom would take me and my brother to the local rodeo arena. We would watch from high in the stands. We could see all the floats passing by, and people and animals all dressed up walking along. You could hear the music playing or the band marching, the people cheering, and the children laughing. No matter what the holiday was, the parades were fun. Of course the memory I remember most are the horses. I wanted so badly to be riding my horse in the parade but for some reason that I don’t remember, I wasn’t able to. So year after year, I would go watch and dream about being in a parade someday.
Well that someday came true. So many years later, my wait was over! I was in a parade on my very own horse this past 4th of July. This was the 2nd annual parade for the Myakka Valley Ranches community and I was so fortunate to be a part of it.  Thank you to everyone who made it possible.
I was nervous. Here was my opportunity that I had been waiting on for most of my life. So many thoughts going through my mind.  I don’t think my horse has ever been in a parade. What will he do, will he spook and take off? Will he rear up and buck? All these thoughts go through my head as I saddle him up early in the morning. I calm myself down, taking deep breaths, telling myself not to spook or runaway. Telling myself we will be just fine, and this is the time and here is your chance to do something you have always wanted to be a part of.
Next thing I know, I’m riding along with other riders, next to other horses, and we are ok. My horse and I are just fine walking and trotting along as one. We are part of a tradition.
The noise and commotion of the parade are just like I remember when I was a kid. Leading this 4th of July Parade is a skilled horseman carrying the American Flag. There were buggies being pulled by horses all decorated in 4th of July decor,  as well as golf carts decorated in red white and blue. There were big horses and mini horses, calm horses and spirited horses. There was noise everywhere. Laughing children with their moms and dads all in the streets, flags blowing in the wind, and people in the street cheering us on. They were cheering me on. Waving as we went by. I wave back at them, smiling from ear to ear, wishing my mom could see me now.  Hoping that she is looking down smiling back at me.  I’m almost in a daze, as I ride along on my beautiful gelding on this crazy hot Florida morning. I don’t feel nervous anymore. I feel relaxed and enjoying every second as we walk along. I’m soaking in every memory, every sound I hear, every little thing about this day.
As the parade comes to an end, I’m looking up to the sky. Thanking my lucky stars that I had this opportunity. It may seem small to some of you, it may seem silly in fact. But to me, I wasn’t that girl in the stands watching anymore. I wasn’t that girl hoping and praying to be in the parade someday. I was the girl in it this time!  Just me and my horse, fulfilling our little dream, one hoofbeat at a time.
AdviceGeneral Equestrian

Jennifer Hazelwood
Published on 08-07-2019
My name is Jennifer Hazelwood and I’m a crazy horse lover! As most horse lovers know, I’m sure your passion for horses started when you were a little girl or boy. It did for me at the age of 6! One lesson on a BIG palomino gelding named Seabiscuit was all it took for me! I have been riding horses all my life and even competed some when I was “younger”. I recently bought a horse last year after almost 20 years without one and boy let me tell you, it’s been the best year of my life! Well, aside from being with my boyfriend! I hope to share my stories and journey with my boy Chief with you, as we learn together and become bonded as one. I’ve had a few ups and downs with him already, but we are learning together and I wouldn’t trade him