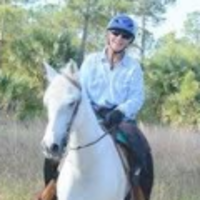 A few years back I used to ride trails with some gals in North Florida.  They were a motley group who took me on some fantastic rides. On one occasion a gal from the group gave each of us an address book/birthday book for cowgirls-real and pretend. That was the title of the book!  It was put together by a group of women called, “The Hats on Gang.” The postscript was (a little bawdy but nice). The gang started with just a few women gathered around a campfire. They used to take a few days to simply go off alone and spend time with their horses.  They came from many different walks of life. Some were professionals, and some were housewives but they all had the same purpose, spending time with nature, one another, and their horses.

In the book each month featured one of gals with or without horses (and sometimes clothes) in some very interesting poses but all in good taste.  But the real story was about the gal on the cover, Connie Reeves, born 1901-2003.

Connie was born in Eagle Pass, Texas.  She studied law at the University of Texas Law school where she received her law degree.  But her real love was a Texas cowboy named Jack Reeves. Together they ranched 10,000 acres.  In addition, Connie headed the riding Department at Camp Waldemar for 67 years. She taught over 30,000 women and girls to ride.  She was inducted into the Cowgirl Hall of Fame as well as the Cowboy Hall of Fame. They have a full-size statue of her there. Connie is believed to be the oldest cowgirl in the Hall.

A month before her 102nd birthday she was thrown from her favourite horse, “Dr. Pepper” and went on to ride in the great beyond.

Mary Abraham
Published on 08-07-2019
My name is Mary Abraham. I will be 80 yrs old this Nov. I have been riding since I was in my 30’s . That was the first time I could afford a horse. I belong to the “Caloosa Saddle Club in North Ft. Myers, Fl. We have about 50 members give or take. We meet once a month starting in Sept. and ending in May. We have speakers ranging from vets to saddle fitters, with many speakers in between. We are primarily trail riders. We have 6 local parks and we have been instrumental in securing these. We are always working with local 20/20 organizations to promote a good relationship with public land and the local equestrian community.