Halloween Bringing Out The Spooks 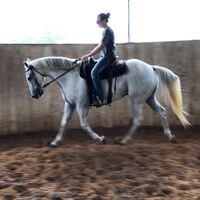 My best horse is a big gray ranch gelding that I have trained to run barrels and poles but also that I use for all of my colt starting stuff. We call him Jake and I can pony any kind of colt off of him. He’s kind enough to let them jerk around and bump into him at first but after awhile he lets them know that it’s not allowed and he will threaten with his mouth wide open or kick out and then go back to being calm and kind. He is a very personable horse, has been treated right and hasn’t been spoiled, and has been through my desensitizing program as a youngster. I compete in obstacle competitions and have won a few with him, he is very trusting and brave.

I’m not riding him much right now so I pulled his shoes and gave him a new very important job of babysitting my daughters filly that we are weaning. He’s turned out with the filly all day and he is the best thing that we could’ve done for her. She had gotten pretty pushy and the mare wouldn’t do anything about it which made things worse for us ... When we wanted to handle the filly she’d try to treat us the same way and push us around too. This gelding won’t let her. He’s very good with her and runs the pasture playing with her but if she crosses any lines with him he puts her in her place. He loves her and has not put a mark on her body but she respects him and minds her manners around him. We’ve started to call him Uncle Jake. My daughter has done all of this filly’s training and is ready to start hauling her some, so she decided to bring her to the show this weekend and dress her up for the Halloween costume class at the end of the day instead of waking up early for halter. We had fun thinking up easy costume ideas and she decided to go with the hula girl theme, purchasing a grass skirt, coconut bra, and lots of lei’s.

We knew that the filly would need to get used to wearing the costume, so three weekends before the show my daughter started to incorporate a component of the costume into her training sessions with the filly, and the filly tolerated each item with no issue! We did discuss the other variable being that the filly will be wearing this away from home, and we know that changing the horses environment can change everything sometimes so we decided that we’d bring Uncle Jake to the show too and lead him beside her to make sure she had a good experience.

The show is coming up in a few days so we decided to try on the entire costume and walk the filly around the barn one more time. We got the flowers on her ears and anklets on her legs and just as we pulled the grass skirt onto the filly’s back, Uncle Jake ambled into the barn. He takes his time going anywhere on his own, walks like he’s half asleep and never hurries much but he does notice everything and is very aware of what’s going on. He got one look at his little filly wearing the grass skirt and was all the sudden wide eyed, wide awake! He froze in the middle of the aisle on high alert, head high, snorting and blowing at the monster that was eating his filly. Before we could laugh at him or even make a move toward him he was gone. Whirled around and out the door gone. Big brave mean uncle jake was scared of the hula girl!! We did laugh but continued dressing up the baby and took her for her walk, while uncle jake stood at high alert behind the round bale , head high and still snorting! I think we’ll leave him at home this weekend... I think the brave baby will be better off without his support!

Your Horse: Keep or Sell?