The Super Bowl is the most telecasted event in U.S. History, where the two best NFL teams of the season battle out for the famous Vince Lombardy Trophy. During the big build up, they always broadcast clips of really, adorably-great, Clydesdales. Clydesdales have been the official mascot of the Budweiser Brewing Company ever since a team of Clydesdales was given to the owner of the company from his sons in 1933, celebrating an end to prohibition. With the team they had instant popularity across the United States as they were the team of horses that brought Budweiser beer, the first drops of alcohol to the White House after prohibition had ended- not bad way to celebrate! Now, year-round a touring Clydesdale team sponsored by Budweiser travels across the country, directly promoting their products but indirectly promoting and preserving the Clydesdale, their beloved mascot. Like the size of the large draft breed, their Clydesdale operations is no small matter, they maintain a breeding farm with over 100 mares, stallions and foals, a touring farm outside St. Louis and two more outpost farms farms in the United States.

Clydesdales however were around far longer than the days after the end of prohibition. From the Clydesdale region of Scotland (now known as Lanarkshire) a mix of local, grade horses were bred with larger, draft horses of Flemish descent which resulted in the Clydesdale. Flemish draft horses, which we can trace almost all draft breeds to (particularly the Belgian draft horse) were introduced early to the British Isle in efforts to improve the strength of work horses. The name Clydesdale stuck from early on and the breed was documented since the 1830s.The importing of Clydesdales to the United States began in the 1840s but the breed didn’t really flourish in popularity until the Budweiser team put them in the national spotlight for the most beloved draft breed. They did however have the reputation for being stronger and slightly faster than the Shire and was the desired draft horse of Scotland and parts of England until the demand for draft horses declined. It was common to see Clydesdales on the streets of Glasgow, Scotland pulling carts and large carriages until the 1920s.

Clydesdales were once a smaller draft horse breed but today it is a very tall breed ranging between 16.2 and 19 hands. Today the world’s tallest horse, or one of them, is a 20.2 hands tall Clydesdale gelding in Ontario, Canada. All Clydesdales in the Budweiser hitch are 18 hands tall. Although they are one of the tallest draft horse breeds, they are not the heaviest. Clydesdales can weigh an average between 1600 and 2200 pounds. Poe, the giant gelding in Ontario weighs in at 2800 pounds.

Clydesdales should a convex facial profile with large, expressive eyes, and large nostrils set on a broad muzzle.Their head should look strong and their expression should be calm but alert. Their necks are long and slope into a broad, deep chest cavity and be set in shoulders that are at a 45 degree angle. Their withers should be set high- something helpful when pulling heavy harness is having strong shoulders and developed withers. Their back should be of equal size in comparison to their neck but can be slightly shorter with a well sprung rib cage. Like their chest cavity, the loins and croup of the Clydesdale should be wide and muscular. Their hocks and knees should be also well articulated with a medium amount of muscling. Their pasterns should be long followed by sturdy fetlocks and large, round hooves. Clydesdales are a breed of draft that have heavy feathering on their legs (and spat which is the hair that goes over the hoof) and often have big white blazes or white markings on their face. They can be seen in a variety of coat colors including bay, black, roan and chestnut. Most Clydesdales, and other draft horses, are shod because of their work often on pavement. Also because of the additional strain and weight the horses bare from whatever they are hitched to can cause cracks in the hoof wall that can lead to lameness or further hoof problems.

Besides being an American icon, Clydesdales are seen in parades, pulling and plowing competitions, renaissance reenactments, pulling winter sleighs, carriages and in forestry work. Pulling many times their own weight, the Clydesdale has survived the changing equestrian environment with their brute strength and calm, trainable personality. 2020-09-21
Hey Guys, it’s Lynnsy here at saddle up! I just wanted to go over a couple of things. A lot of our customers, when they come in, they just want to know about the gullet in a saddle, and when... 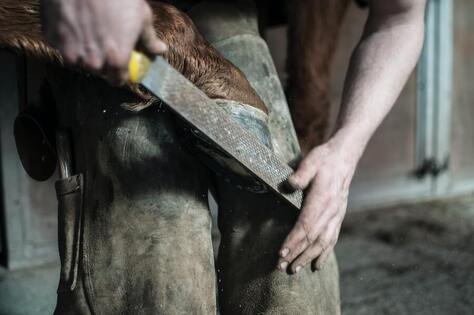 The Farrier Is A Horse's Best Friend

By Katharine MacCornack    2020-09-21
Adopting a rescue horse brings both joy and sorrow. The joy of getting to know a new horse and working with him/her to form that inimitable bond for which horse lovers strive. Sorrow comes from a sad ...

By Frank J. Buchman    2020-09-21
Frank Higgs, Kip Strate, Bud Higgs, Colton Krueger and Makenzie Higgs gather yearling cattle from the Flint Hills in late July. (Doug Busby photo)  Watching the sun come up as cattle gra...
Newsletter
Follow us on
Share
Search 30,000 ads on the U.S leading equestrian site
on horseclicks:
home | contact us | terms and conditions | testimonials | about us | sitemap | help | privacy policy | Scams | mobile site
Disclaimer HorseClicks is not responsible for any errors or incorrect information posted by its members and does not represent or share opinions of its members. Accessing this website signifies your agreement to be bound by the Terms of Service.©2020 Horseclicks.com - all rights reserved - a member of the Friday-Ad network  |  dev (((:))) Memória Visual