The beautiful Andalusian horse is an ancient Spanish breed,  that is somewhat well preserved over hundreds of years as one of Spain's most prized and beloved breeds.

Originally from the region of the Iberia peninsula in southern Spain, their popularity quickly spread throughout Europe during the Renaissance and the stallions were expensive trading commodities for the Spanish for hundreds of years. It was not uncommon for Spanish ambassadors to gift one of their fine horses to a hosting country. If you talk with someone from Spain about the Andalusian, they might politely tell you this is not their name, but Pura Raza Espanol, or the Pure Spanish Horse.

They were the official calvary horse of Spain and played a key role for the Spanish when fighting the Moors and in many other battles. The breed's forefathers were also exported to one of  Spain's 'New Worlds', to Latin and southern North America where the breed carried conquistadors into the heart of the Americas.

All Andalusians can trace their bloodlines back to a breeding operation looked after by Carthusian Monks for over 400 years and then by private farms in Spain and Portugal.

This horse would not exist without the help of the Monk's strict breeding program. When people were crossing their horses to larger draft horses when armour for knights became too heavy for pure Andalusians, the Carthusian Monks protected the purity of the ancient breed and it survived through almost near extinction.

Before the Spanish claimed their adoration for the breed, they were for the Romans of equal interest, equally in war as unafraid mounts and as entertainers in circuses or for wealthy families. It is fairly unanimous that the famous Paleolithic paintings of the Chauvet-Pont-d'Arc cave in southern France, where the oldest preserved paintings of Stone-Age horses has been found, are most likely the forefathers of the Andalusian, or the great Iberian Horse. 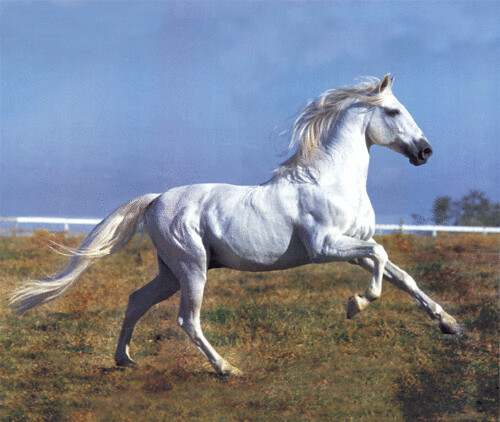 They are known for their fearlessness and loyalty to their rider.

No longer used for military purposes, these horses have adapted to different disciplines of riding. During the Renaissance, the Andalusian expressed what the ideal dressage horse looked like and is still seen mastering the most difficult dressage manoeuvres. Many consider them to be the first warmblood, a very popular type of horse for dressage but that term is loosely relevant to the breed because of their strict history of cross-breeding to draft horses.

They are also the most common horse seen in Spanish bullfighting, the horse for the rejoneadors, and other traditional Spanish events. Andalusians are also seen in jumping, western pleasure and driving events and make also great ranch horses. This breed directly influenced the Azteca, the official horse of Mexico, founded in the mid 20th century that represents ideal ranch horse qualities from both the Andalusian and Quarter Horse. The Andalusian is also responsible for helping establish the Lipizzaner and is very similar to the Lusitano breed of southern Spain.

Andalusians stand on average between 15 and 15.2 hands tall and come in a variety of colours such as grey, black, chestnut, bay and dun with the majority being grey. On average they weigh between 900 and 1,000 pounds. They have larger heads with long, sloping facial features and a long neck set in a medium-high carriage. Andalusians should have a large chest, deep barrel, fairly short back with medium muscling. They have exceptionally natural high-action knees and hocks which are shown in their expressive gaits. Andalusians are typically very docile and well-temperament horses but like Arabians, they sometimes can be high-spirited.

The first Andalusian to be exported out of southern Spain and away from the watchful eyes of dedicated breeders similar to the Carthusian Monks was not until 1962. Widely popular as a beautiful, noble horse that excels at dressage, they are not so well known outside of Spain. Less than 10,000 Andalusians are registered in the United States and less than 40,000 are registered in Spain. The International Andalusian and Lusitano Horse Association, or the IALHA is an active registry with shows for the Spanish breeds nationally throughout the United States and also worldwide.

Your Horse: Keep or Sell?