Laminitis; A Lot of Variables I Missed 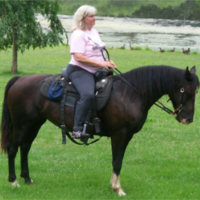 About two weeks ago I heard one of the 2 most dreaded words in a horse owner’s vocabulary. “Laminitis.” (The other being colic.)

We’ve had a wet spring and summer. My 18-year-old Rocky Mountain mare Ara, got thrush. I got that cleared up but she still wasn’t walking normally. She still seemed to be sore. I called my farrier because that’s who I call for feet. He came out, trimmed her up and told me she had laminitis. Of course, I said “Foundered?” and he said yes. A million things ran through my head. How did this happen? I don’t feed much grain. I only feed grain in the winter and if it’s going to be below 30 degrees. Other than that It’s hay and pasture. Her feet never get long. The farrier only trims about an inch when he’s here.  I said as much. He turned and looked at my pasture and told me that was the cause of the laminitis. He said I’d been “blessed with good pasture “ and with all the rain this year my pasture had a lot of sugar/starches in it. It’d made her overweight and thrown off her metabolism and causing the laminitis. He did admit that her feet should have been “blowing up” but they weren’t. I put that down to a Rockies' strong constitution. He did point out a ridge that I’d noticed but hadn’t really been worried about. Apparently, it was the danger sign I overlooked. It was being caused by the hocks and upper hoof swelling and the lower hoof was trying to heal itself causing the ridge of flaky, protruding hoof tissue.  The good news was that the bone “hadn’t turned” meaning the coffin bone wasn’t sinking and the ridge wasn’t V ing down towards the toe.

Ara’s ridge on her front hoof.

There was hope.  I asked him what to do for her.  He told me to dry lot her. Put in a small pen and only allow her the grass in it. I closed off about a 50ft x 20 ft area and locked her and the two goats in it. (They were fat too) He told me about a supplement called  Remission. So I locked her up and went to the farm store and bought the Remission by Animed... A 128 day supply was only about $20 and I thought that was pretty reasonable. Give 1 oz per 1,000lbs a day while the horse is having symptoms and then a ½ oz every day for prevention.   I read the label and though it has several different ingredients, the two big ones were probiotics and magnesium. So I went home and gave her 1 0z. I tried putting it in peanut butter, didn’t go well. Then I tried honey (even though I didn’t like giving her the extra sugar. Still not successful.  Finally, I just mixed it with water into a thin gruel and put it in a 60ml oral syringe. Stuck it in the corner of her mouth and just pushed slowly so she’d have time to swallow. That seems to be the best method for her. There wasn’t much else to do but wait so I hit the computer to see what I could learn about laminitis.

First I checked into the definition of laminitis.

Laminitis is the inflammation of the lamina of a horse’s foot.  The hoof becomes inflamed and the toxins and weakens the connection between the coffin bone and the hoof.  It can be acute, suddenly and early, or chronic which is there all the time and may get worse and then may get a little better. The chronic laminitis is considered founder.   The worst cases are when the coffin bone has started to sink into the bottom of the hoof. Basically, it’s caused by the horse going into a sugar/ starch (carbohydrate) overload messing up their metabolism causing toxins to develop and settle in the feet causing inflammation and the sole of the foot separating from the hoof. The number one cause? Too much high carbohydrate pasture. The worst situation is when the coffin bone sinks there’s no stability in the hoof and the capsule can rotate. That’s profound and there no coming back from that.

I started reading about pasture, minerals, probiotics, weather, exercise and obesity in horses.  The more I learned, the more I realized I had created the “perfect storm” for laminitis.

I moved a couple of years go to a smaller place. I went from 20 acres down to 10acres.  Less grazing less worry right? I’d forgotten to factor in that the old place had 6 different pens of 2-4 acres and the animals grazed in one section at a time and then were rotated to a different pasture. They took in less grass individually.  Fewer carbs. At the old house, I had 3 horses and 8 goats. Getting ready to move to a smaller place I only kept 2 horses and 2 goats. Last fall I sold the other horse. It happened over time and I didn’t realize how just moving out one horse could change things. Another thing I  didn’t take into account was how my ground had changed. The new place was an old hog farm. It had a lot of erosion and bare spots. Two years later, especially with all the rain, the pasture is thick with red and white clover. I discovered that clover, as well as alfalfa, have a higher amount of carbohydrates than grasses like Orchard grass or Timothy.  The last thing that mare needs. I also found out that heavy rainfall also increases the carbs in pasture and basically it keeps it growing like spring grass which is high in carbohydrates. My horse should’ve been in a diabetic coma. Last but not least was exercise. I used to ride about 3 hours every weekend but they closed the park close to me about 3 years ago so I just rode around home. Then with getting one house ready to sell, moving and working on the new house, I’d been riding less and less the last few years.  I saw that even if I couldn’t go on long rides I should have at least been lunging her or walking her. Anything to use the calories she was taking in and giving her heart a workout. All these changes happened slowly, over time and I really hadn’t reevaluated my situation from year to year and it lead to my horse getting laminitis.

I looked up magnesium and probiotics use in cases of laminitis.  The magnesium helps balance blood sugar, improves circulation, decreases inflammation and builds bone.  Low magnesium can lead to behaviour problems. Ara was never a social animal. She’d tolerated other animals as long as they didn’t challenge her food source and wasn’t big on human attention.  You could give her neck a few pats and then she’d move off. She never liked her head or ears rubbed. Since she’s been on the magnesium she’s less aggressive toward the goats and seems to like human attention now.  It’s possible she had a magnesium deficiency, to begin with.

Probiotics keep the “hindgut “ working properly. It keeps the gut acidic so that food’s properly digested and toxins don’t build up and get distributed through the body settling in the feet and causing the inflammation, to begin with.

Two weeks later. About three days after putting Ara in a dry lot and feeding Remission she began to move around the lot more.  About 8 days into the treatment she would start walking away from me when I went to give her the supplement. By day 14 she was throwing her head and gaiting away from me. Never been so happy to have to chase that horse down! She’s still overweight but has definitely dropped several pounds. The goats have really trimmed down too.  I’ll start walking her in soft grass when her feet are better and then lunging her once I see how she does. I’m not sure whether I’ll try a grazing muzzle or not when this is over. But I plan to turn her out in the evening for an hour to graze and then slowing moving up to 3 hours, depending on how she tolerates it. Morning and evening are the best times to let a laminitis-prone horse eat because the carbs in the grass are lower.

There is certainly much more information out there on laminitis than what little I’ve told you about here.  You could research the topic for weeks. I’m just trying to give you some basics so you know what to watch for and what to consider in the prevention of laminitis.  I Hope all your horses stay healthy.

Shannon Coleman on Ara. I have been dealing with horses all my life. Our family (my father, me, my  brother, uncles and cousins) raced harness horses from the time I was two until I was 14. As an adult I continued to ride with my husband and sons and rode in competitive trail rides

Shannon Coleman
Published on 01-07-2019
Shannon Coleman on Ara. I have been dealing with horses all my life. Our family (my father, me, my brother, uncles and cousins) raced harness horses from the time I was two until I was 14. As an adult, I continued to ride with my husband and sons and ride in competitive trail rides.